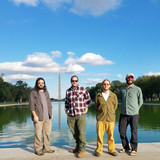 The Rumpke Mountain Boys combine signature vocals, a unique command of string instruments (acoustic guitar, mandolin, upright bass and banjo) and dynamic special effects into a singular musical experience. An emotion filled musical stream of consciousness with no setlist, minimal structure, and intuitive improvisational flow. In this way, they summon the energy of the crowd as their guide in linking just the right music to precise moments in time. Like playing around a campfire, the Boys take turns calling the next tune, distilling shows from a sea of infinite notes created from years of jamming. Drawing upon a growing catalog of originals and and an eclectic mix of covers, the Rumpke Mountain Boys blend music like a fine Irish whiskey– the result affectionately dubbed Trashgrass. The Boys titled their 2012 album release with the same name, followed by their 2013 release, Moon, which was recorded at the famed Royal Studios in Memphis. The band is currently touring behind their latest studio release, “High Time, Low Tide”. Catch them in a town near you!