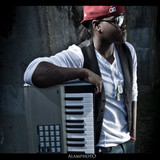 Janaye Adams-Ombala, known professionally as Nay The Producer. Female Producer/Song-writer/Artist/Audio-Engineer. Bay Area born and raised! She has a inexplicable vision, her style in music is very diverse. Nay got her passion in music from R&B to Jazz at young age from her mother and grandfather. From R&B, Hip Hop and Pop she is very unique. Nay molds projects by taking her inner circle, life, and passion then melting them together to create a final masterpiece. Nay strives to make inspirational music, from her instrumentals to her lyrics, her music will move you. She was picked up by Indie Hip Hop Label First Dirt in 2011 & went on the Northern CA portion of The Vintage tour with Timothy Rhyme. Unfortunately she was diagnosed with lupus in 2012. In 2013, she appeared on the Paid Dues Music Festival with First Dirt opening up for Macklemore & Kendrick Lamar which led to the FDCA Tour.