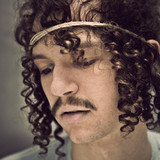 An equal mix of indie, wacky, Beck, and Fleetwood Mac, Brooklyn’s Darwin Deez is skilled at mixing sunshine pop with some indie attitude and lo-fi dissonance, but he’s been known to drive audiences crazy with his offbeat, Napoleon Dynamite-like dance routines. After spending time in the N.Y.C. band Creaky Floors, Deez formed the band that sports his name and released the infectious indie pop single “Constellations.” Live shows where the bandmembers entered dancing to “Peanut Butter Jelly Time” made them the talk of the Brooklyn hipster set, while the U.K. caught on thanks to their early 2010 single "Radar Detector" and its extremely bonkers video. That same year the band collected all its best “happy songs for sad people” for a self-titled debut album released by the Lucky Number label. Over the course of the next decade, the band continued to record for Lucky Number, releasing the albums Songs for Imaginative People in 2013, Double Down in 2015, and 10 Songs That Happened When You Left Me with My Stupid Heart in 2018. ~ David Jeffries, Rovi