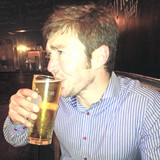 Dave always wanted to be a rockstar but never really got around to it. Until now that is. Despite being on the wrong side of his mid 30s he's thrown his all into his music now, better late than never.   Hailing from Melton Mowbray and being a former pork pie maker amongst other things he released his debut album 16 Years in 2016 an amalgamation of songs written over that time period. With a follow up album in the works a mere 12 months later he's clearly got his act sorted now. His latest release is Presents, a more acoustic based offering than his usual sprawling prog epics. Written after a song writing in which Dave would write a new song for every live performance. Sometimes finishing the lyrics just before heading out to perform. Now hot on the heels of Presents comes So Close. A collection of seven songs with titles cunningly stolen from elsewhere. But fear not, the music is all new and all good.