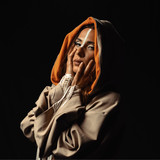 First Nation singer/songwriter Anyma, invites us to her own bewitched universe – a place of wild and thunderous spaciousness, of shadow and lightness, of staggering beauty. Sailing between pop-Indie culture, electronic textures, orchestral elements and vivid sounds inspired by her Wendat Nation.Her lyrics uncover a path toward self-awareness, courage and wisdom. Born and raised in Wendake, Canada, Anyma’s father was a musician/producer and cultural chief of her village.Her mother a professional dancer/choreographer. Together they introduced her to an early life on stage through his professional production of “Ozalik” that actively ran for five years in Quebec markets. On June 20th, 2020 Anyma released “Circus” – offering advice to stand strong in life’s challenges of any kind, while unveiling her own path to follow. True to her name, Circus is an introspective account that embraces her individuality, inspires freedom and celebrates the feminine. Circus is the first release from her debut album set to release in Winter of 2020.