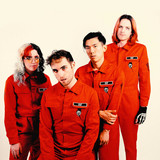 Save Face are a band who have always prided themselves on taking risks and the New Jersey band have doubled down on that sentiment with their sophomore album, Another Kill For The Highlight Reel. In that spirit, the follow-up to 2018’s debut Merci sees the band mastermind Tyler Povanda taking his songwriting, lyrics and conceptual skills to the next level to create an album that’s more interested in building worlds than adhering to genre conventions. While the songs’ inspiration is firmly rooted in the screamo/post-hardcore scene that was so pivotal for Povanda, the album also features piano, full string sections and horns he arranged himself. “As soon as I started working on [recording software] Logic, it opened my mind to all of these different sounds and I just started putting everything in there,” he says of his creative process. “I just trusted myself and kept going deeper with every song.”

That said, there is nothing artificial about Another Kill For The Highlight Reel, which features indelibly human performances, including a guest appearance from Thursday’s Geoff Rickly on “A.M. Gothic”. “There’s something about the New Jersey kinship [between Geoff and I] that really resonates with me,” Povanda explains. “New Jersey’s music scene is really something special.” However, Povanda is quick to point out that Rickly’s understated performance on the album isn’t intended to be a marketing bulletpoint.