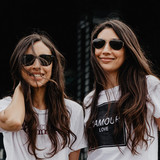 Deer Park Avenue first became known as the sister rock duo who live their lives on tour, delivering honest, in-your-face, jeans-and-t-shirt rock ‘n’ roll. The sisters released their album Conscious Mess – a raw, energetic debut release with Muve Recordings – on Lockdown Day 2020, the day the whole world became a mess of fear and confusion. Conscious Mess is an album that swings easily from bright, sunny satire to unnervingly honest introspection, and back again. Powerful, gritty vocals dip into soft, intimate confessions, while booming toms melt into personal, storytelling percussion. The stark contrast between loud and soft, high and low, light and dark is a polarity that defines DPA as few other bands. With sounds channeling raunchy Jack White-style guitars, big drums of the 70s, and the angsty distortion of the early 90s, the album touches on greed, depression, isolation, racism, personal identity, being a misfit, and just growing up. It’s about life. About identity. About knowing who you are, and knowing who you aren’t. Sometimes #WeAreAllAMess – and that’s ok. We’re all in that together. Deer Park Avenue’s stream of conscious*mess is about that realization, the most liberating of them all.