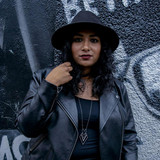 Jess Pillay is an independent singer/songwriter from Seattle, Washington. Raised by Indo-Fijian immigrant parents, Jess spent her earliest years predominately immersed in two drastically different musical styles: church music and Hindi movie (Bollywood) soundtracks. Whether she was singing along to a Bollywood song during a family road trip or singing in the church choir, Jess knew at a young age that music was her life’s passion and ultimate calling. She spent several years developing her craft as a singer and pianist and studied music formally throughout high school and college. In 2016, Jess launched herself as an independent singer/songwriter. Since then, she has been writing and performing original music primarily throughout the Greater Seattle Area. Influenced by artists like Rachael Yamagata, Missy Higgins, Amos Lee, and Norah Jones, she is known for her soulful alto voice and writes a lot of story-driven, introspective ballads. Her lyrical themes explore a variety of subjects like hope, fear, love, loss, faith, doubt, and the ever-changing nature of personal relationships.