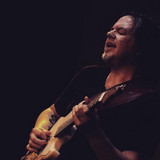 Rob Garland grew up in England, worked in a diverse array of bands and later played hundreds of gigs at festivals and clubs in the U.S., opening for artists such as B.B. King and Chuck Berry. He now lives in Los Angeles, where he continues to write, record and release his original music ranging in genre from jazz/rock instrumental, to acoustic vocal tunes. Rob plays at clubs such as The Baked Potato, Alva’s Showroom and The Mint with his Eclectic Trio and jazz/funk band Catatonic. He has recorded sessions at studios such as The Village Recorder and Bad Robot, and has performed live with artists such as Steve Vai and Jimmy Haslip. He is on the faculty at Musicians Institute in Hollywood, (GIT) where he teaches guitar and he also teaches for TrueFire/JamPlay with best selling guitar instructional courses.