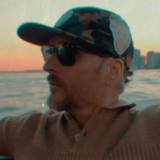 As a child, after being randomly discovered in an art class Getty began his Hollywood career starring in the film adaptation of the Nobel Prize-winning novel Lord of the Flies. From there he continued to fill his resume with many classic and hit films. Most recently, Getty reunited with his friend and mentor David Lynch to revive the much-anticipated Twin Peaks series for loyal fans worldwide. Despite his success as an actor, his true love was his music, which always existed with Balthazar. At 15, he was hanging out with the Beastie Boys, skating a half pipe they had in Glendale. He sold his first beat to House Of Pain . Balthazar signed his first major record deal with lnterscope Records, releasing the Ringside album in 2004. Most recently, he founded PurpleHaus Music, which serves as a platform for his creative endeavors and boasts a wide array of new talent, plus curated collaborations from artists including Wu-Tang Clan, and Latin Grammy Award-winning artist Asdru Sierra. Balthazar continues to advance the Getty Family tradition of arts patronage and community outreach in many exciting new ways. In 2018, Balthazar will be introducing his animated alter ego BALT GETTY, opening up a creative space on Fairfax and launching two ventures related to his other love - fashion.<br>