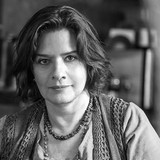 Maria Rita Stumpf www.mariaritastumpf.com Born in the South of Brazil, the singer songwriter is fond of primitive sounds entwined with electronics, innovative elements, classical music, and MPB, producing a much sought after contemporary output. Powerful lyrics speak of love, life and nature. This original blend has taken her music to the set lists of DJs and younger audiences on streaming aroun the world. She started her career in the 1980s when bossa nova master pianist Luiz Eça helped her release the now iconic LP Brasileira which featured group Uakti, followed in 1993 by the CD Mapa das Nuvens, after which she decided to quit and start a fruitful professional path as arts promoter. During 25 years she worked with celebs such as Mikhail Barishnikov, American Ballet Theatre, and pianist Valentina Lisitsa. By 2015 her album Brasileira had been a rare item in the vinyl collections worldwide, and the song Cântico Brasileiro 3 (Kamaiurá), opened the doors to her return to the music scene when it was included in the compilation Outro Tempo (Another Time) released by label Music From Memory. Her 1988 album was re-edited by label Selva Discos, formed by Brazilian DJs of Festa Selvagem (Wild Party) and is distributed worldwide by Kompakt, Germany. She then resumed her stage performances bringing her powerful voice to a young, numerous and well tuned international audience. Andre Oliveira Artist Management & Booking +55 21 969 190 793 whatsapp skype: andre.jorge.oliveira