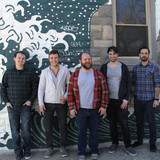 Our Fair City is a band from Philadelphia, PA with a sound much to their own. Since releasing their debut album 'A Most Clever Disaster' in 2010 they've received lots of positive praise being described as "a love affair between emo, post-rock, and indie". The band – fronted by vocalist and guitarist Joe Conboy – takes a broad approach when songwriting by embracing aggressive dynamics, unconventional songwriting structures and influences of post-rock and ambient genres. The group also consists of Dave Leonhardt (bass), Chris Bratek (keyboard/vocals), Kevin Keane (guitar), and Dan McCafferty (drums) who deliver just as much intensity live as they do in their studio recordings. Their latest release, 'The Animal Manual', is a concept album with lyrical prose dealing with subjects of life and death, love and loss, and questioning faith versus a lack thereof. The album was self-recorded by the band and was mixed & mastered by Dave Downham (Into It. Over It., Young Statues, Their/They're/There) at The Gradwell House in Haddon Heights, NJ. The chemistry clearly shows in this effort. The vocals are dynamically layered creating ethereal harmonies while ringing out painfully honest lyrics. When contrasted with the heavy, almost chaotic soundscape, they combine to create a result that truly carries throughout each song. The band is currently touring regionally in support of the album.