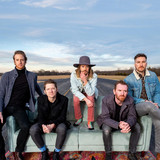 Since forming in 2006, Moon Taxi have brought their genre-bending musicality to a boldly adventurous body of work, all the while taking their live show to leading festivals across the country and sold-out runs at such iconic venues as the Ryman Auditorium in their hometown of Nashville. Consisting of vocalist/guitarist Trevor Terndrup, lead guitarist Spencer Thomson, bassist Tommy Putnam, keyboardist Wes Bailey, and drummer Tyler Ritter, the five-piece has released five studio albums, including 2018’s Let The Record Play. “Two High,” the first single from Let The Record Play, catapulted Moon Taxi to new heights, amassing over 130 million streams on Spotify to date and becoming a Top 10 hit at the Alternative format radio. Their most recent single, “Hometown Heroes,” ushers in a dynamic new era for the Nashville-based band. On “Hometown Heroes,” – a wistful but brightly textured and immediately catchy track - Moon Taxi have captured a universal sentiment, thereby allowing the listener to project their own recollections onto the song. Moving forward, Moon Taxi are not holding back; they feel newly exhilarated by the possibilities in their future music-making.