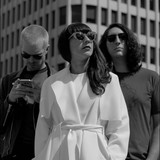 Formed in 2007, Cloud Control are an award-winning indie rock band from the Blue Mountains, just outside of Sydney, Australia. With a dreamy sound blending elements of folk, psychedelic pop, and synth pop, the quartet, made up of Heidi and Ulrich Lenffer, Alister Wright, and Jeremy Kelshaw, made their debut in 2010 with Bliss Release. The album would go on to win the band the Australian Music Prize, as well as ARIA Award nominations. Their sophomore album, Dream Cave, arrived in 2013. In January 2015, the quartet became a trio when bassist Kelshaw announced he had left the group. The announcement came as Cloud Control were in the midst of a period of inactivity, but in May 2017 the group returned to duty with a single and video for "Rainbow City."