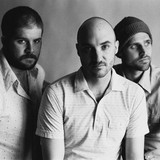 Ojai is an indie pop outfit from Omaha, NE led by songwriter Michael Hulstein. Their song All I Can Ask was featured in Spotify's official Fresh Finds and Fresh Finds: Rock playlists in 2017. Sappy love ballads or tragically bleak? That’s the question for Omaha based band Ojai. No matter the subject, their sophisticated pop arrangements and turn of phrase leave listeners with earworms with a painful sincerity unmistakable for Ojai, inspired by the likes of Andy Shauf, Big Thief, and Wilco. Catchy is the name of the game and Ojai won’t settle for anything less. The indie pop trio’s sound is concentrated around Michael Hulstein’s thoughtful vocal melody and roomy instrumentation, accentuated by the groove and punch of Micah Renner (bass), and Tanner Rogerson (drums). Recently losing two members, Ojai now perform live as a three piece. “Moving to a trio was definitely a learning curve for the band but as time goes on I feel much more life in the music this way,” Hulstein says. “My songs are so focused on vocal content so it’s difficult competing with so many other instruments and also keeping the integrity of what the song means.” Ojai’s last two releases Welcome Home and On the Mend (Album) were two uniquely formative albums for the group, and their newest might be the most ambitious to date. The band’s third album View From The Chandelier boasts a rise in maturity and comfortability as a band. It will be released Friday, April 24th on all platforms.