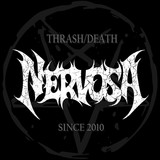 A punishing, all-female thrash metal band, Nervosa was founded in 2010. In 2012, the band issued a video for debut single "Masked Betrayer," which became a YouTube hit and caught the eyes and ears of Napalm Records. A deal was signed and the band headed into the studio to record their first EP, Time of Death, which arrived later that year. During this time, Nervosa was sharing the stage with a bevy of hard-hitting contemporaries, including Exodus, Raven, D.R.I.., Destruction, Grave, Samael, and Artillery. In 2014, the band released their first full-length outing, Victim of Yourself, followed by their sophomore studio long-player, Agony, in 2016. After extensive touring with over 400 shows to promote the album, in 2018 Nervosa release in June their 3rd studio record, "Downfall of Mankind". Line-up: Diva Satanica - Vocals Prika Amaral - Guitars & Backing Vocals Mia Wallace - Bass Eleni Nota - Drums