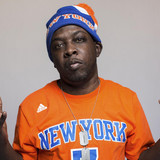 As part of the pioneering rap group A Tribe Called Quest and their extended Native Tongues family, Phife Dawg helped usher in a whole new style of intelligent hip-hop. Born Malik Taylor, Phife grew up in Queens, New York, where he spent his childhood writing poetry and eventually rapping at school and in his neighborhood whenever the opportunity was available. Along with high-school classmates Q-Tip (Jonathan Davis) and Ali Shaheed Muhammad, Phife founded ATCQ, whose legendary decade-long career ended in 1998 with The Love Movement. Phife began flexing his new freedom in 1999 with "Bend Ova," the first single for his new U.K.-based label, Groove Attack. A full-length titled Ventilation: Da LP was released the following year, including appearances from Pete Rock, Hi-Tek, Supa Dave from De La Soul, and Phife's alter ego, Mutty Ranks. It was his only LP, although he was part of many ATCQ reunions during the 2000s and also recorded tracks for a solo follow-up, to be titled Songs in the Key of Phife: Vol. 1 (Cheryl's Big Son). Suffering from diabetes as early as 1990, when he was diagnosed, he was given a liver transplant in 2008, but died at the age of 45 in March 2016. ~ Wade Kergan, Rovi