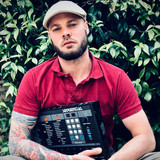 22a label boss, flautist, saxophonist, producer and DJ, Ed ‘Tenderlonious’ Cawthorne is regarded as one of the most influential figures in London’s burgeoning underground music scene. His record label, 22a, is one of the most respected independent record labels in the UK, credited with influencing a generation of young musicians and producers in London as well as internationally. His various live projects, and studio productions have gained high praise and support from some of the key tastemakers, DJ’s and radio stations in the world, such as; Gilles Peterson, Bonobo, Lefto, Bradley Zero, Tom Ravenscroft, Huey Morgan, Benji B,

Alexander Nut, Jamz Supernova and many more. 2020 see’s him continue to run his 22a record label, whilst working across multiple live and studio projects, as well as a busy DJ schedule. He will follow up his 2019 studio album ‘Hard Rain’ (Bandcamp’s electronic albums of the year 2019) with a new EP ‘After The Storm’ due for release in March 2020, quickly followed by another new album of fresh electronic, analog productions set for release in July 2020. He is also the man responsible for the world renowned and most prolific U.K. jazz band, Ruby Rushton. Check out their latest single "Overture 1", with more new music due for release in June 2020. If all that wasn't enough, check out his latest live projects with Pakistani band Jaubi, and his tribute to the British jazz legend Tubby Hayes.