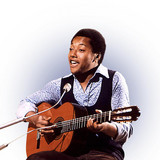 London-born singer Labi Siffre has spent his career breaking down boundaries. The openly gay singer built a small cult following with works that dealt squarely with homophobia and racism. In addition to his many albums, the multi-talented Siffre has written several books of poetry and has also written for the stage. Musically, Siffre is known for his soulful, high-pitched voice and thought-provoking lyrics. His single "I Got The..." from his 1975 album Remember My Song received a modicum of fame decades after its release when its funky piano hook was sampled in Eminem's 1999 debut smash single "My Name Is." In 1988, Siffre had a hit with his anti-apartheid anthem "(Something Inside) So Strong," a song that embodied his vocal talents and his social conscience. ~ Jon Azpiri, Rovi