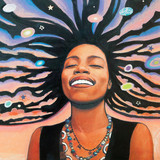 The singer, songwriter and producer Jhelisa Anderson has the kind of voice that can soar, soothe and break down walls. She was once described by GQ Magazine as ‘the cosmic princess of soul’. The Mississippi-born musician grew up singing in church and was a stalwart of 1990s London, signing to Dorado for the creative freedom the label offered after a stint with One Little Indian records (Soul Family Sensation, The Shamen, singing backing vocals on Björk’s Debut). Along the way she’s had a reception job at Motown, worked with Jeff Buckley, Chaka Khan and Massive Attack, toured with James Brown, Herbie Hancock and Roy Ayers and once drove Nina Simone to hospital after the legendary singer twisted her knee. She co-wrote and co-produced her critically acclaimed 1994 album Galactica Rush. Language Electric (1997) was album of the year in publications including THE FACE and Echoes and TimeOut Magazine described her albums as ‘important precursors to more widely acclaimed debuts by D’Angelo and Maxwell’. She recorded A Primitive Guide To Being There in New Orleans and released it in 2006, after she had been flooded out of the city by Katrina. In 2018 the Atlanta-based singer and ‘frequency designer’ recorded a collection of meditation music titled ‘7 Keys’, now being released on Dorado Records. She layered multiple recordings of her voice, creating sub-harmonics that weave under her sounds generated by her selected musicians.