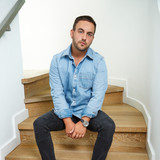 Miami-born singer-songwriter Matluck is a multi-platinum/Emmy award-winner who began his music career while in college at the University of Florida. Through steady networking and collaborations with the likes of Nicky Romero, Felix Jaehn, Dzeko, Mike Williams, Afrojack, Elephante, and many more, Matluck quickly secured sync placements in noteworthy productions such as 22 Jump Street and Get Hard which led to his discoverability and credibility among his peers and the industry. Upon being signed by Jason Flom, Matluck expanded his craft by collaborating with artists like Mau Y Ricky, Karol G, Becky G, CNCO, Tokio Hotel, Jordan Smith, and In Real Life. As a bi-lingual and multifaceted artist, Matluck does everything from rapping to singing, composing on multiple instruments, and writing in both English and Spanish. Showing no signs of slowing down, “Mi Mala” a song Matluck recently placed, has already surpassed over 50 million streams since its release. His newest single, “In My Arms” show's

Matluck’s pop sensibilities and crossover appeal. His debut EP is expected to hit the market in the fall of 2021.