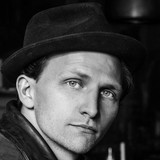 Fintan McHugh was born in Dublin into a musical household. In the spirit of the traveling troubadour Fintan sings and accompanies himself on the guitar, the Irish-cittern and harmonica.   Three years after his critically acclaimed debut -Wait Till The Clouds Roll By-, Fintan McHugh’s long awaited second album titled -Stardust And Bone- will be released on the 22. November 2019. Stardust And Bone is an album of original songs by Fintan which shows him in a more personal and independent light. As Wait Till The Clouds Roll By, Stardust And Bone remains true to an acoustic intimacy and poise. Fintan’s songwriting skills are paved with his unique vocal style and his characteristic guitar playing to form an outstanding album of eleven songs to stir the heart and soul. The imagery invoked by Stardust And Bone opens up a field of tension in which the earthly stands against the cosmic, the human body against the stars as they smoulder and die leaving only their dust trails as evidence of their existence. Stardust And Bone invites the listener to dream and long for more from this uniquely talented artist. Fintan is an extraordinary musician and singer. He’s one to look out for!