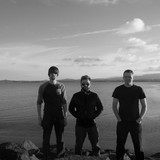 “Thou liest, thou shag haired villain!”

Macbeth, Act IV Scene II Shag Haired Villains are David Byrne, Derek Carney & Shane Waldron. What began as a group of like-minded musicians getting together to jam some cover songs in 2012, quickly developed into a vehicle for their original music. Bringing a broad range of influences to the table helped the Villains forge their sound: a modern take on classic rock with songs based around punchy guitar riffs and rockin’ choruses In October 2015, three years of constant writing and gigging culminated in the release of their debut album: Red Lake.