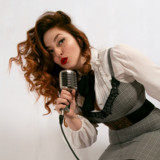 Elisa Cipro is a multilingual pop singer with a versatile and powerful voice. Second-born of a Southern Italian emigrant family, she writes poetry since she is a child and she collides with music as early as 12 years old. She trains in musical theatre and she performs in theatres up until today. She starts her songwriting career in 2016. Her music is autobiographical and it reflects her joyous character and sensitive personality. Her Italian heritage and her melodic music style is soon mixed with British influences and in 2018 she releases 'Happiness' which is chosen as soundtrack of the movie 'Harmonie' directed by J. Jimenez. She also collaborates with other artists such as Martin Chishimba, Mario Lucchesi, Paolo Costa, Iskra Menarini and British producer Tokøta with whom she releases 'River', a cover of a Joni Mitchell hit. She is a self made artist and she embodies strong, independent women.