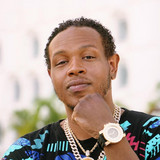 At first glance; Cleveland, Ohio’s own Michael “Big Stove” Stover is everything you wouldn’t expect a rapper to be. At 6’7, 285lbs, you’ll catch him during any performance light on his feet and owning the stage like one of his idols; the late, great Heavy D.

Becoming a rapper wasn’t always the plan for Big Stove. While many artists struggle to find their purpose in life, Stove’s kind of fell into his lap. After the untimely death of his cousin in 2006, Big Stove vowed to continue his cousin’s dream and legacy through music. Always musically inclined; it comes as no surprise when he’s able to hold a note on his songs as he sang in both a church choir and in the choir of his Alma Mater; Kent State before embarking on his rap career. His style of rapping is calm and laid back, and mainly focuses on lyricism which was important in the Hip Hop music of the 90’s that so heavily influences him. He’ll tell you, “I try to live up to the wordplay of the past emcees that have graced the stage of Hip Hop”.