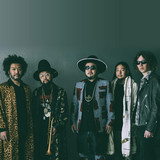 Soil & "Pimp" Sessions are a Japanese jazz combo who play music inspired by the sound and style of classic bebop, Latin jazz, and cool jazz, but with a funky undertow and the passion, aggression, and force of rock & roll. The group features five musicians -- Josei on piano, Tabu Zombie on trumpet, Motoharu on sax, Akita Goldman on double bass, and Midorin on drums -- as well as Shacho, credited as "agitator and spirit," who prowls the stage as the group performs and occasionally offers gravel-voiced encouragement. The group first came together when Tabu Zombie and Shacho began appearing at dance clubs featuring jazz nights; as DJs spun groove jazz sides, Zombie would jam along on his horn as Shacho worked the crowd, and the response was strong enough that they eventually formed the band to play full live sets without the DJs. As Soil & "Pimp" Sessions' reputation on the Tokyo club scene grew, in 2003 they became the first unsigned band invited to appear at the Fuji Rock Festival, and in 2004 they released their first album for JVC Victor, Pimpin', which was followed by a steady stream of albums and EPs. Giles Peterson, the British DJ who launched the Acid Jazz label, took notice of Soil & "Pimp" Sessions, and after giving them steady airplay on his BBC radio show invited them to play London in 2005. The combo signed with Peterson's Brownswood Records label for Europe and the U.K., and soon became regulars on the international festival circuit, impressing audiences with their energy and instrumental skill. In 2008, Soil & "Pimp" Sessions struck a shortlived American distrbition deal with Koch Records, and Planet Pimp became their first U.S. release. The band toured Europe the following year before rentering a Japanese studio and emerging with 6 for Japan's Victor in 2009, and Brownswood in Europe in 2010. In December they released Soil & "Pimp" Sessions Presents Stoned Pirate Radio in Japan, a 20-track covers album that included readings of everything from "Mack The Knife" and "Shaft In Africa" to "Imagine" and "One Step Beyond" done in their own inimitable style. It was followed less than a year later by Magnetic Soil and just a few months into 2013, by Circles, a live audio and video disc package that featured the band celebrating its tenth anniversary with a host of guests including Jose James, Rhymester, and Shiina Ringo. Soil "& Pimp" Sessions shifted to the Victor-distributed T-Annex for 2014's Brothers & Sisters studio set. They re-emerged on the global scene with 2017's Black Track. The album was recorded and mixed by Yasuji Okuda at Studio MSR. It wove punky postbop, hip-hop, neo soul, electronics and Latin rhythms in an intense yet utterly accessible manner. Guest appearances gave the set an international flair by spotlighting Filipino-American rapper Bambu, R&B singer Nia Andrews (Solange) and French vocalist Xavier Boyer of indie pop band Tahiti 80. Black Track was issued by Victor who released it in North America via license by Red River. ~ Mark Deming, Rovi