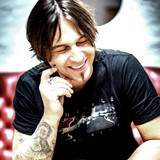 René Shades released his debut album Teenage Heart Attacks & Rock’n’Roll Heaven in 2019 to high critical acclaim and solid radio play in mostly Northern Europe. His new single STARS FALL DOWN is the latest release on his solo career endeavour. Shades has a vast history in music. He has been wing man and guitar player for Mike Tramp on several tours. He also has helped out other bands such as Shotgun Revolution as a guitar player. For the last 10 years he been the bass player & member of the Danish band Pretty Maids, a band in which he was recruited a guitar player. He has also played and sung on many release tracks with other artists as a studio musician. Shades has always been very involved in songwriting and influences came early on the 80 growing up and listening to the radio and watching MTV. In his solo career move he stay true to his roots in rock, pop and country. He states that he was very much influenced in the 90's by country radio even when it wasn't deemed cool or in and also growing up as a teenager in the 80´s has given him a very melodic way of approaching songwriting. Together with Hans-Martin Buff (Prince, Scorpions) and Flemming Rasmussen (Metallica, Blind Guardian) & Jacob Hansen (Volbeat, Dizzy Mizz Lizzy, Pretty Maids) Shades has found his dream team to work with and continues doing what he loves to do. The songs are very diverse about Life, dreams, stories & reality. All available here on Spotify.