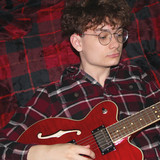 Stoney Point is managed by Red Skies Label. Stoney Point was once a three piece band; Mason Ostebo on Drumset, Koby Schneider on bass, and frontman Joseph Johnson. After a headlining gig before the Worldwide pandemic the group would fall apart and fall into hands of Joe to continue again. Almost everything is written and preformed by Joe Johnson. Back in 2016 he picked up guitar and started writing grunge songs in Audacity. He tried the process again though only a year later inspired by a gift from a friend from Canada. Joseph acquired DAW FL Studio 12 and found co-founder Crude's Boardwalk through a producer Discord. For the past few years Ryan of Crude's Boardwalk and Joe of Stoney Point have developed alongside eachother growing their collective/label as they see fit. They now hope to shake up the current music soundscape with music you have never heard before.