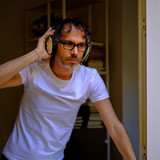 Until the age of 14, James had no formal academic musical education or dedicated mentoring. Aged 18 he stopped playing the piano entirely for a decade. Since returning to the piano, he has released seven albums, all of which have topped the iTunes classical charts. He has performed in venues around the world from the Barbican, Roundhouse, Royal Albert Hall, Latitude Festival, Queen Elizabeth Hall and Soho Theatre in the UK to major halls in Europe, Australia, Hong Kong,

Colombia, Argentina and more. In addition to writing regularly for the major UK newspapers, James has presented a Chopin documentary for BBC4 and had his own television series James Rhodes: Piano Man on Sky Arts. He presented and performed in the acclaimed television documentary “Notes for The Inside” which aired in August 2013 on Channel 4 in the UK. In 2014 James filmed a two-part documentary for Channel 4 called ‘Don’t Stop The Music’ which gave schoolchildren the chance to learn a musical instrument by calling for an 'instrument amnesty' - a mission to collect unused musical instruments from around the country which raised over £1 million of instruments for primary schools in the UK. His Sunday Times and international bestselling memoir, Instrumental is a brutally honest, moving and compelling story that was almost banned until the Supreme Court unanimously overthrew an injunction in May 2015.