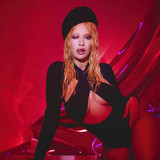 Rita Ora is an international critically acclaimed singer-songwriter with four #1 UK singles and holds the record for the most Top 10 singles for a British female artist in the UK in history with a total of 13. In 2021, she launched the global collaboration Bang, with GRAMMY nominated Kazakh DJ and record producer Imanbek. Written and produced over Zoom by Rita and Imanbek and featuring David Guetta, Gunna and Argentinian rapper KHEA, the four track EP is a mix of modern pop, 80s and 90s club culture and floor-filling house. The EP is the follow up to her album Phoenix, which has amassed over 3.7 billion streams worldwide, spawned 3 platinum singles and includes “Lonely Together,” her collaboration with Avicii which won “Best Dance” VMA at the MTV Video Music Awards. In addition, her debut album, Ora, debuted at #1 on the UK charts and was certified platinum.