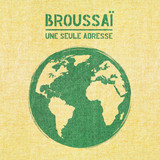 Broussaï are a French reggae group with a roots style who made their album debut in 2004. Founded in 2000 in Mâcon, France, the group is comprised of Eric Waguet (guitar, vocals), Alex Biol (guitar, vocals), Reynald Litaudon (bass), Bruno Dubois (drums), Mickael Govindin (keyboard), and Romain Ouanounou (keyboard). They made their full-length debut in 2004 with the album Insurrection on Nyavibes Records. Subsequent albums released on the label include Avec des Mots (2007) and Perspectives (2009), the latter of which was the group's first to reach the French albums chart. ~ Jason Birchmeier, Rovi