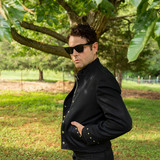 “All my songs are short stories populated with fictional people, some of which are me. Every song I write, no matter how sad or strange, has a little joke in there…” Gary Russell Wertz (GRW) started his musical career as a youngster at 14 years old in the New York Punk scene of the early 1980s, playing CBGB’s. Inspired by his heroes from the British invasion, Garage Punk, American Hard core & Country & Western, Gary begin writing, singing & recording his own songs at an early age, recording his tunes on a beat up Tascam 4track. At 20, Gary joined the quirky pop combo the Mommyheads & moved west to San Francisco. 2007 heralded the beginning of an intense musical relationship with the fine artist & genius songwriter Kyle Ranson. Recording as Strawberry Smog, they proceeded to unleash a masterpiece trilogy of Psychedelic Folk albums (Purgatorious, 2&3 & their latest, 2018’s Forevers) all produced by Gary. In 2011, another GRW L.P., the hard rock inspired “Wet Rocks” emerged on the desert rock label Treasure Craft. In 2018, Gary relocated to Nashville,Tennessee to connect with the many fine producers and pickers that can be found there. He has been a featured performer at The Bluebird Cafe and other legendary local music venues. Sacred Dog Studios has been re-established in Nashville, with Gary overseeing production on Kyle Ranson’s first solo L.P., slated for a summer 2020 release. GRW’s third solo LP, the Country & Rock flavored “Hybrids” will be released in the late 2020.