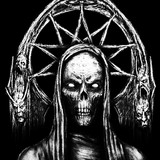 Transgression from Leverkusen/Germany are again complete in 2020 and celebrate their US-style Death Metal with a hint of Thrash and Groove Metal. The band is compared to bands like Cannibal Corpse, Malevolent Creation, Napalm Death or Sepultura. Techy, fizzy Death Metal in a tight and groovy set, paired with unexpected and chaotic breaks, blast beats and hooks dominate their songs. The band has released so far 6 albums with changing line-ups, leaving only Rene -founder and main songwriter- as a constant member on lead guitars. Since their last release "Scourge For Mankind" Oli joined on lead vocals. The band is completed by Steve at 2nd guitar/vocals and since last year by Florian (drums) and Dong (bass), both of which pair up to a powerful rhythm section. Transgression take no prisoners and offer Metalheads everything based on that description. New songs are being written and will be included in upcoming sets as well as theirs classics. The band shared stages with bands like Vader, Pungent Stench, Krisiun, Misery Index, Disastrous Mumur and Dew-Scented to name a few. That's where to be again and they're currently working hard on that. Be prepared.