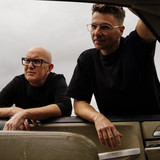 Chocolate Puma is a Dutch DJ/Producers duo consisting of René ter Horst and Gaston Steenkist. They are two of Holland’s most celebrated producers with a career spanning 27 years, 400+ releases and countless remixes. Delivering hits under several artist names, such as The Good Men, Jark Prongo and René et Gaston. In 2001 the duo came up with what would be their last alias Chocolate Puma. And got off to a dream start with the release of ‘I Wanna Be U’ that became a worldwide hit. Then after ‘Learning’ and ‘A Star Is Born’ they released ‘Always And Forever’ what again ended up in the UK singles chart, they decided to let go of all those other aliases and go on as Chocolate Puma. Over the last years, C P and leading label Spinnin Records have enjoyed a close relationship. Records like ‘Step Back’ ’Steam Train’ (with Hi-Lo), ‘Scrub The Ground’ (with Tommie Sunshine & DJ Funk) and ‘Hippo’ (with Moksi)

have placed Chocolate Puma in a league of their own and steadily built them a loyal legion of fans all over the world. It’s no surprise CP have regular appearances at major clubs and festivals, including Hï & Ushuaia Ibiza, Tomorrowland Belgium, Mysteryland The Netherlands, EDC and Omnia Las Vegas, Sensation Korea, Veld Festival Canada. Head to see a DJ set and a lot of the tracks you hear will be produced by them, while the rest contains edits of some of their favourite brand new tracks, all mixed and improvised on the fly into one massively energetic set.