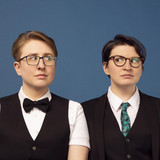 Humorous, sometimes pointed, and often embracing geekdom, the Doubleclicks are a comedy folk duo based in Portland, Oregon. The kids of a Berklee College of Music professor and a fiber artist, siblings Aubrey Turner (cello) and Laser (guitar, ukulele) grew up in Massachusetts, playing music together for as long as they can remember. Inspired by albums they grew up on by the likes of the Smothers Brothers and Weird Al Yankovic, they released their debut EP, Beta Testing 1-2-3, in 2010.   Calling themselves the Doubleclicks, they started a song-a-week project on YouTube in 2011 that resulted not only in album material but tours that often included non-traditional venues such as game and comic book shops and conventions. They self-released both the children's EP Worst Superpower Ever and the full-length Chainmail and Cello in April 2012, with the Christmas Ain't About Me EP following that December. The Doubleclicks' second LP, 2013's Lasers and Feelings, hit number seven on the Billboard Comedy Albums chart.   With song titles like "Cats & Netflix" and "Love You Like a Burrito," Dimetrodon followed in 2014, and 2015's President Snakes reached number two on the comedy chart. Their fifth and sixth albums, Love Problems and the Book Was Better, debuted at number one. ~ Marcy Donelson, Rovi