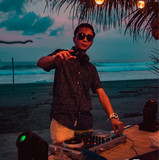 Rafael Menéndez better known as DJ Ram is a producer and songwriter from El Salvador. Since childhood, he demonstrated his taste for music influenced by Michael Jackson, and at the age of 7, he learned to play the drums.   Later, he became interested in electronic music, influenced by his father who listened to music from the 80s and 90s like Depeche Mode, Pet Shop Boys, and others. By the age of 11, he began his career as a DJ where he has participated in Belize and different events in his country.   By the age of 13, he began producing his music, influenced by Kygo, Robin Schulz, Jonas Blue, etc. he started writing songs and getting that Deep and Tropical House Vibe.   Since 2019 he posted 5 singles receiving support from new fans around the world.  Currently, he is working on new music and trying to experiment with new genres.