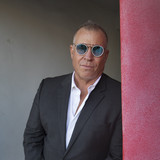 The Sully Band, “Let’s Straighten It Out”: A platter of 10 classic soul and R&B rave-ups is served up hot on the debut album from this well-oiled San Diego band fronted by Bob “Sully” Sullivan, a do-it-yourself entrepreneur, radio and TV host who channels his powers of persuasion into the role of magnetic frontman. Recorded at the legendary Henson Recording Studio (formerly A&M Studios) in Hollywood with multiple Grammy Award-winning producer Chris Goldsmith, and Grammy-winning bassist James East as musical director, “Let’s Straighten It Out” captures the band’s show-stopping magic with versions of songs by Billy Preston, Jackie Wilson, Ray Charles, Shuggie Otis and Latimore. Put this slab of vinyl on the turntable–or crank up your iPhone–and get the party started.