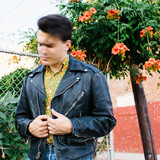 Vincent John has spent the spent the past decade creating timeless Soul/R&B recordings for the likes of legendary artists including Lee Fields, Nicole “Lady” Wray (Missy Elliot, Blakroc), El Michels Affair & more.   In 2016 Vincent John stepped out on his own to release his debut EP Never Go Back. The self-produced record immediately garnered critical acclaim from a wide range of publications, with the likes of Billboard stating “As guitarist for Lee Fields & the Expressions, John knows a thing or two about soul music. But on ‘Heaven Knows’ he finds his own voice in some of the 1980s most timeless pop and new wave artists with a modern electro pop twist, delivered with a soulful sense of honesty.“   In 2017 John produced and released his second EP, Tangerine, a record which expanded his signature 80s Pop/R&B sound with touches of Afrobeat (“Foolish Game”), World Music (“Tangerine”) and even House (“Fantasy”). Along the way, he has always been able to deftly impart a sense of timeless human emotion to his modernist form of expression. This fact is never more apparent than on his forthcoming release, a 4 song EP simply and elegantly titled Fate.   Fate is not only produced by Vincent John, it is also slated to be the first release on Eraserhood Sound, a Philadelphia-based record label co-founded by John specializing in what he dubs "Synth & Soul."