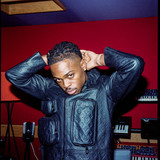 Growing up on a diverse Canning Town estate influenced by Grime and Afrobeats, 24-year-old Yxng Bane’s musical career as we know it today, started by accident. Before leaving for university, Bane casually uploaded a song to Soundcloud, unknowingly demonstrating his deft ability to mix elements of drill whilst rapping and singing too. Within six months, ‘Lone Wolf’ had amassed over 1M+ plays, marking the start of a prosperous career. In 2016, he released his debut EP, ‘Full Moon’, before pushing his genre-fusing skills further, experimenting with an Afrobeats sound, the results were vibrant and contagious; Yungen’s collab ‘Bestie’ in 2017, saw Bane reach no. 10 in the Official Charts. Yet it was his dancehall-infused remix of Ed Sheeran’s ‘Shape of You’ that truly cemented his status as one of the most exciting new talents around, landing him a BBC Sound of 2017 longlist nod. The hits kept flowing. The following year, instant party-starter ‘Vroom’ scored him another top 30 and ignited dancefloors across the globe. A European and two UK tours later, Bane sold out Brixton Academy in 2019 in a wild performance attended by Wiley. Gracing stages from Disturbing Ibiza, to supporting Nicki Minaj’s UK tour & Wizkid, Bane’s live shows constantly draw in international audiences. Bane dropped an impromptu mixtape in 2020, ‘Quarantime: The Lost Files’ with features from Headie One, D Block Europe & M Huncho, an unapologetic showcase of his commitment to his own musical acuity.