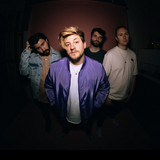 Originally making their name in the pop punk scene, Two Year Break have transformed into something unique. Taking influence from artists such as Bring Me The Horizon, Enter Shikari, You Me At Six and Don Broco... you'll be hearing heavy riffs and catchy melodies all day long. The guys have gone and got CHARLIE SIMPSON to feature on their new single “Lovin’ Every Day”, as well as having sold out every headline show they've played & receiving consistent backing from BBC Radio 1, Kerrang TV, Kerrang Radio & BBC Essex. The London based outfit are currently reeling off the back of their latest singles all airing across the above stations... with BBC Radio 1's Jack Saunders shouting about “#bitbright” saying: “If you’re not into this, you’re committing treason!" Two Year Break have just released their debut album “Do You Wanna Find Love?” which delves into the modern day difficulties that come with having an online presence. It also further looks to address the mental struggles that being online can throw at us and how these effects can easily creep into other aspects of our lives. The lads are really stepping up their game & this latest collaboration with CHARLIE SIMPSON shows that off perfectly. With the hype they're building and the tunes to back it up... their debut album is definitely one to watch! CHECK OUT "DO YOU WANNA FIND LOVE?" THE DEBUT ALBUM - AVAILABLE EVERYWHERE NOW! <3