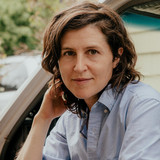 Brooklyn-based Mirah Yom Tov Zeitlyn (b. 1974, Philadelphia) creates incorruptible independent pop music defined by her graceful songwriting and adventuresome recordings. Mirah has released over a dozen solo and collaborative recordings on K Records, Kill Rock Stars and various US domestic and foreign independent labels while touring the United States, Europe, Japan, Australia and New Zealand many times since 1998.   Mirah remains a force through her expansive catalog and the artists she inspired, teaming up to reissue her seminal album You Think It's Like This But Really It's Like This (20 Year Anniversary Reissue) with Brooklyn indie label Double Double Whammy in 2020. The 20th Anniversary reissue included a tribute compilation of friends and collaborators covering each of the album’s tracks. In 2021, Mirah is set to reissue her sophomore album Advisory Committee, including landmark tracks “The Garden” and “Special Death.” The album crystalized Mirah’s reputation as a notable songwriter and will be available, on colored vinyl, for the first time since 2002. Mirah’s critically-acclaimed 2004 album C'mon Miracle (named Pitchfork “Best New Music”) will also receive the reissue treatment and will be available, on colored vinyl, for the first time since 2014. Frequent collaborators over the years have included Phil Elverum (The Microphones/Mount Eerie), Merrill Garbus (Tune-Yards), Eli Crews, Greg Saunier (Deerhoof), Thao & The Get Down Stay Down, and many more.