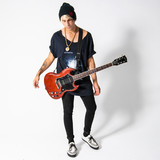 High energy sounds combined with purposeful lyrics became the catalyst for a life long journey. A decided to create something that would engulf all of his loves into one single entity. One that would not be bound by genre or the typical rules of the sounds, but be free and be symbolic of freedom to be who you really are. Since that day ATHRS has been on a wild ride searching to portray his vision. From being featured at national festivals such as Imagine Music Festival, Sunset Music Festival, Forbidden Kingdom and more, to crossover collaborations with legendary artists like Craig Owens of Chiodos and BadxChannels. ATHRS has amassed thousands of views between tracks from his “Pop Punk Is Dead” EP, Collaborations with artists like SWARM and earlier Releases, While quickly picking up steam being featured on outlets like Alternative Press, This Song Slaps, EDM.com EDM identity, New Noise, Good Music All Day, ATL By Night and more.

With insane production, shredding guitars and lyrics to make you party, cry, and question your very existence, ATHRS is determined to stir the human experience in a signature way. Every ounce of his being is left on stage, on the record, and throughout every interaction. ATHRS is here to show the world it’s okay to be you and to encourage others to strive to be the best versions of themselves. We write our own. Electronic Pop Punk Noise Maker from Florida. We write our own. www.athrs.com