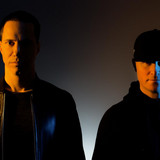 For two decades, Calyx & TeeBee have forged an unprecedented path at the forefront of Drum and Bass. They had already amassed an astounding back-catalogue spanning all of the genre’s seminal labels, before they came together to form a duo 12 years ago. In the years that followed, Calyx & TeeBee reached new heights with chart-topping singles, prestigious awards, a revered BBC Essential Mix and their acclaimed LPs: ‘Anatomy’, ‘All Or Nothing’ and ‘1X1’. Fast forward to 2019 and Calyx & TeeBee have built up yet another incredible body of work - once again they’re back with new beats - and a brand new concept.   The concept? ‘Plates.’ Taking it back to the days of acetate, ‘Plates’ will be a series of releases themed around original dub-plate culture, both musically and aesthetically - culminating in an album of the same name.   This is a welcome return from one of the most revered double acts in drum & bass. ‘War Dub’, ‘Cloak & Dagger’, 'Look To The Skies' & 'Made In Detroit' are just the start of an exciting and evolving project. Introducing the concept, Calyx & Teebee say: “Having released 2 albums since we joined RAM Records, we’re excited to be starting our next chapter with them by launching a new series called ‘Plates.’ It takes us back to our DnB roots - both musically, and in terms of how the music disseminates to our peers, fans and ravers.”