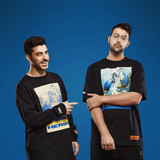 United by their passion of house music that consumed their teenage years, Israel-based duo Teamworx certainly fit the bill for success. Their journey began as two classmates, Ben Azoulay and Saar Lagziel, bonded over a shared passion and hunger to create their own unique signature sound. The duo’s breakthrough hit came in the form of a blazing record called "Make The Crowd Go". Swiftly picked up by Protocol Recordings label head Nicky Romero, the track became one of Protocol’s most supported releases that year. The track became a major festival mainstay, working its way into the mainstage sets of Steve Angello and Fedde Le Grand, as well as countless others. Their breakthrough record caught the label boss Nicky Romero’s attention, which lead to the unprecedented collaboration between him and Teamworx titled ‘Champion Sound’, which later on became one of the most-supported tracks of 2017 and has swiftly become a staple in the sets of headliners such as Martin Garrix, David Guetta, Alan Walker, Afrojack, and Nicky Romero himself, gracing some of the biggest stages worldwide. With multiple releases on Protocol, Universal, Spinnin’ and more and major festival slots lined up in the next festival season, it is safe to assume Teamworx are one of Israel's most prominent exports in 2020. Far from a short and lucky strike upon the industry, the uber-talented pair show no signs of slowing down, and are putting all of their efforts into becoming the hottest act of the decade.