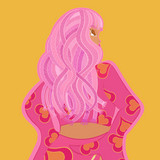 Singer-songwriter Hunnah has the rare ability to reach out through the speakers and forge an emotional bond with her listeners - a connection that feels vital, even urgent, in an age of Internet-enabled distraction.   Hunnah’s story began when her parents came to Canada from Ethiopia, eventually landing in the Toronto suburb of Brampton. She began her musical education with piano lessons at age 4, and by age 9 she was performing at church and writing her own original songs.   Since then her fan base has been growing by leaps and bounds, driven by listeners looking for something real from their music, not just a speedy viral buzz. The Fader got it when they called her lighter-than-air neosoul update “Think About It,” a “soul and mood cleansing” bop. She’s also making fans out of some of music’s most influential trendsetters like Cuco, who gave her the beat to her dreamy breakout single “Crush” after she heard it on his Instagram.   Recently, Hunnah relocated from Brampton to Los Angeles to see where her talents will take her. These are still early days, and she’s only beginning to show what she’s capable of. No one can say where this path will take her, but with a talent this profound, you can bet it’ll be a long one–and the first step will be straight into your heart.