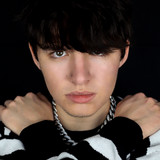 18-year-old independent newcomer Tyler Lorette is a multi-instrumentalist from Greater Toronto Area, Ontario, Canada with over 2 million career streams to date. In the summer of 2020, Tyler won the Cover Nation/Warner Music cover song contest earning him a spot to perform on their global YouTube platform for thousands of fans. They described Tyler as “Always having great energy and swag, and the vocals to back it up”. Tyler released his latest original called “Wild ‘Bout You” and in the Spring of 2020, Tyler released “Turn on Me”.

Tyler also performed at Playlist Live, Social Media North, Z Star Digital, Red Phoenix Concert Events, featured on Late Night in Canada, and several other online creator events. In 2018, Tyler released “Fly with Me” recognized as a top 12 artist for the CBC Music Searchlight contest and his original song titled “Love It Up” was a finalist in the International Song Writing Competition. He also released an original song called “High Frequency” which obtained the winning spot on the Nashville music charts. Tyler also had the opportunity to perform for the Lieutenant Governor General of Ontario in an intimate showcase with his mentor and vocal coach Roberta Michele, as well as a local tour performing over 100 shows. Tyler was also showcased in a short film and named “Canada’s Rising Star” in a countrywide school initiative presented by Intertrain to celebrate the arts in schools.