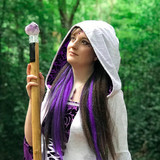 Livia has been enchanting audiences with her magically-infused music, mystical melodies and distinctive lyrics at festivals all around the UK and abroad, since she started touring her debut album ‘Journey Of An Empath’ in 2014.   Drawing on her family's Venetian heritage, and blending pop, rock, folk, latin, industrial and gothic sounds with elements of Pagan music and Wiccan mysticism, she has created her own unique brand of 'magick pop'.   In 2010, she was discovered by BRIT Award-winning songwriter, producer and MD, Simon Ellis (The Spice Girls, Britney Spears) who has championed her music ever since they began working together. Ellis produced 4 of the 12 tracks on ‘Journey of an Empath’ and is currently working with Livia on her new record due out next year.   Livia developed serious anxiety, depression and OCD after experiencing severe bullying at school. Following a nervous breakdown in 2009, she has dedicated her musical career to highlighting mental health issues, writing songs with deep and diverse subject matter, such as grief, loss, surviving being bullied and overcoming obstacles, with the occasional supernatural encounter thrown in!   When Livia performs live, she is joined by her Elemental dancers - a group of skilled performers and flow artists who represent the four ancient elements of Earth, Air, Fire and Water.   Visit www.liviamusic.com