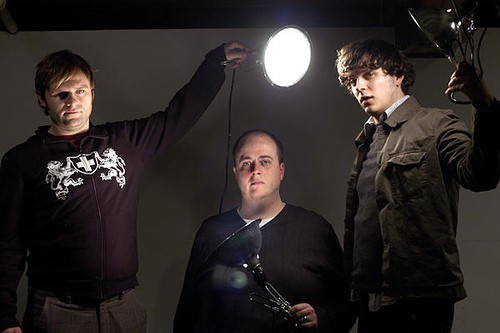 Nashville post-hardcore trio Apollo Up! blends punky aggression with a fondness for tricky song structures and unexpected dynamic shifts, creating a cerebral but impassioned sound equally akin to the deceptively accessible experimentalism of Ted Leo & the Pharmacists and the cool intensity of Fugazi. After several years spent slogging through a variety of minor local outfits with names like Lotushalo and the Shakedown Cruise, Alabama-born singer and guitarist Jay Leo Phillips, bassist Mike Shepherd, and drummer Jerome Frey formed Apollo Up! in late 2002. The group signed with respected local indie Theory 8 Records (the Carter Administration, the Sincerity Guild, etc.) in 2003. Their debut album, Light the End and Burn It Through, was produced by Nashville engineer Jeremy Ferguson (best known for his work with Be Your Own Pet) and released in January 2004. Following the release of Light the End and Burn It Through, Phillips began to split his time between his own band and a new role as bassist and keyboardist in the Nashville dream pop trio Forget Cassettes, regularly touring with both bands while playing a major role in the recording of Forget Cassettes' second album, 2006's Salt. After singer and lyricist Phillips returned to his primary outlet, the second album by Apollo Up!, Chariots of Fire, was released in June 2006, once again produced by Ferguson and released by Theory 8. ~ Stewart Mason, Rovi