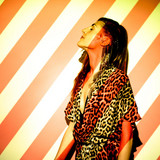 “...ISQ are a melting pot of genres – jazz, pop, acoustic and experimental – which all blend together to an entrancing effect...” - TIME OUT LONDON CRITICS CHOICE   ISQ are Irene Serra (vocals) and Richard Sadler (double bass). With Chris Nickolls (drums) and Naadia Sheriff (piano), they take a conventional jazz line up of vocals, piano, double bass and drums and add their own, very open, approach to their original music. The band members have performed in prestigious venues such as the Barbican Centre, Royal Festival Hall, Royal Albert Hall, Ronnie Scott’s, PizzaExpress Jazz Club, Union Chapel in Islington, Kings Place, the Hackney Empire and the National Theatre. Their second studio album “TOO” was a Time Out London Critics Choice in 2015 and their third release “Requiem For The Faithful” marked their first ever UK tour in 2019 with 19 dates across the country and saw the band firmly establish a reputation as a formidable emerging force in terms of both creativity and performance. Out on the 21st May, ISQ take a leap into electronic music territory with their upcoming album “Requiem For The Faithful 2.0: The Remixes”, as unexpected collaborations with artists such as house music legend Arthur Baker, Faithless’s guitarist Dave Randall, DJ/Producer Emmanuelle and Bafta -award nominated composer Vince Pope (Misfits, Wallander) have created a truly memorable slice of electro-pop music. “…original songs that defy categorisation…” - JAZZWISE