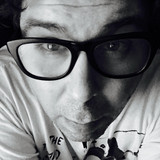 Major Matt Mason USA is the performing name for musician, poet, and producer Matt Roth. Originally from Shawnee, Kansas, Matt cut his teeth playing guitar for local Lawrence, KS freak out and math rock bands Magic Nose and Dracomagnet in the early 1990s. In 1994 Matt moved to New York City where he became active in the anti-folk and DIY music scene of New York’s East Village. Centering around the infamous Monday night, open mic, Antihoots at the Sidewalk Cafe, the scene was an early stomping ground for an array of artists including Beck, Regina Spektor, The Moldy Peaches, Langhorne Slim, Jeffrey Lewis and more. In 1998 MMMM USA released his debut solo album Me Me Me in the US. The album was licensed for the UK and Europe on Teenage Fanclub drummer Francis MacDonald’s label, Shoeshine Records. He would continue to release two more albums with Shoeshine: 2002’s Honey Are you Ready for the Ballet and 2004’s Bad People Rule The World. In 2005 Matt released a one-off project under the moniker of Kansas State Flower and in 2007 he returned as Major Matt Mason USA with the album Senile Pie Strive Pip Melancholy. In 2001 he formed the band Schwervon! with Nan Turner. Schwervon! would go on to release five albums and a handful of singles, including a 7” on Pavement member Bob Nastanovich’s label Broker’s Tip Records. In 2015 he started a poetry blog entitled Beef Jerky Clouds. and in 2017 he formed a side project, Broken Heart Syndrome, featuring Pat Tomek of The Rainmakers on drums.